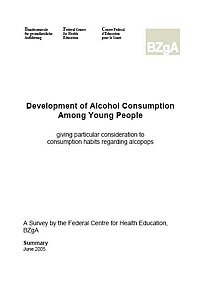 The consumption of spirits-based alcopops among 12 to 17 year-old young people declined significantly between 2004 and 2005, both in terms of frequency and as regards quantity. At the same time, there is an increase in the percentage of respondents who have not drunk these alcopops at all in the past year. 12 to 15 year-olds are reducing their consumption to an even greater extent.

Spirits-based alcopops are primarily no longer being bought because they have become too expensive as a result of the introduction of the tax on alcopops, and because young people are better informed about the associated health risks.

Powdered alcopops, which produce a ready-to-drink alcopop beverage when dissolved in water, were consumed by roughly 1% (0.78%) of 12 to 17 year-old young people in the last 30 days prior to the survey in 2005. At that time, it played hardly any role in terms of the alcohol consumption of this age group.

As regards the other types of alcohol covered by the study, it can be seen that the frequency of consumption of beer and spirits remains constant. The frequency of consumption of wine/ sparkling wine and cocktails/long drinks among 12 to 17 year-olds is declining significantly. A decrease in the quantities of alcohol consumed (grams of pure alcohol per week) for the individual types of alcohol is primarily to be observed among young males.

Addition of all the quantities of alcohol consumed indicates that total alcohol consumption (grams of pure alcohol per week) among young people is declining, both including and excluding spirits-based alcopops.