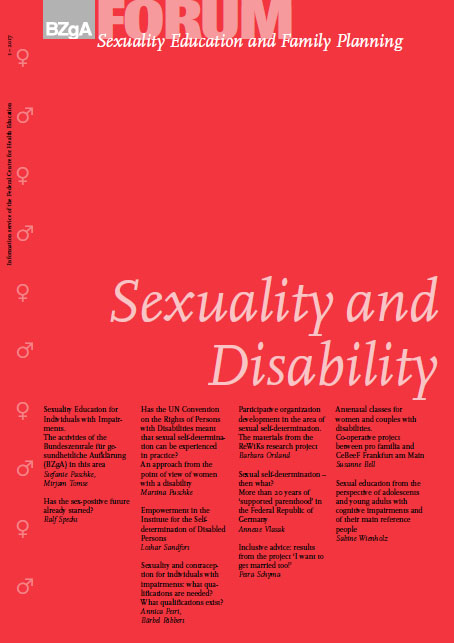 This is now the third time we have addressed sexuality and disability as a topic in the FORUM series. We want to know about the current state of affairs: has the sex-positive future (Ralf Specht) that we hoped for in FORUM in 2010 already begun? What about women with a disability?
Can they now practise their sexual self-determination unhindered (Martina Puschke)? Has empowerment become an educational goal for all parties and institutions involved, as Lothar Sandfort demanded?

Much has happened since the Convention on the Rights of Persons with Disabilities and the German governments National Action Plan. The BZgA has increased its efforts to implement the new guidelines and is revising existing services (Mirjam Tomse, Stefanie Paschke). It initiates and funds projects such as ReWiKs, which will be introduced by Barbara Ortland.

In summary, we are very pleased that much has changed for the better in all the working areas described, say Annica Petri and Bärbel Ribbert as they take stock in their contribution about being qualified in the field. Over the past 20 years many things have been set in motion for parents with disabilities, notes Annette Vlasak in her essay. Susanne Bell notes that there is a somewhat more open-minded attitude on the part of the public and the media.

So they do exist: the small and at times larger areas of progress in achieving self-determined sexuality for individuals with a disability in Germany. The authors of this publication are largely agreed on this. However, they are also clear about what remains to be done in their fields of work in order to achieve complete self-determination and real inclusion. Petra Schyma for example points to the necessary sustainability of funding for inclusion projects beyond their pilot phase. Sabine Wienholzs research has led her still to see controlling and limiting structures at work that stand in the way of self-determined sexuality and use of contraception by young people with a disability. Ralf Specht reminds us that this work should follow an integral approach in which a bespoke overall concept and interlocking action plans replace well-meaning but hasty action for actions sake.