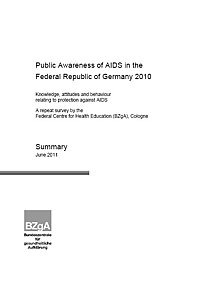 Public Awareness of AIDS in the Federal Republic of Germany 2010

Knowledge, attitudes and behaviour relating to protection against AIDS
A repeat survey by the  Federal Centre for Health Education (BZgA), Cologne

The AIDS education campaign entitled "Don´t give AIDS a chance" has been informing the population of the Federal Republic of Germany about HIV and AIDS and the associated infection risks since the mid-1980s. It tells people that and how they can protect themselves against infection with HIV and other sexually transmitted diseases. Information offerings in the form of both mass and personal communication are made available, specifically targeting different segments of the population.
The principal goals of the campaign are to prevent the further spread of HIV and to create and stabilise a social climate that is opposed to the stigmatisation and isolation of people with HIV and AIDS.
Since 1987, the Federal Centre for Health Education (BZgA) has been conducting an annual study entitled "Public Awareness of AIDS" to examine

The present Summary contains key results of the latest survey, which was completed at the end of 2010.