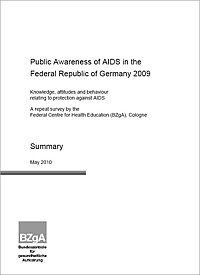 Public Awareness of AIDS in the Federal Republic of Germany 2009

Knowledge, attitudes and behaviour  relating to protection against AIDS
A repeat survey by the  Federal Centre for Health Education (BZgA), Cologne

The AIDS education campaign entitled "Don´t give AIDS a chance" has been informing the population of the Federal Republic of Germany about the disease AIDS and other infection risks since the mid-1980s (www.gib-aids-keine-chance.de).

The principal goal of the campaign is to prevent the further spread of HIV and AIDS. To do so, it is first necessary to achieve a high level of information among the public regarding infection risks, non-risks and possibilities for protection in connection with HIV/AIDS and other sexually transmitted infections (STIs), and to maintain this level in the long term. The second objective of the campaign is to help encourage both the motivation to use protection and actual protective behaviour in risky sexual situations. The third essential concern is to create and stabilise a social climate that is opposed to the stigmatisation and isolation of people with HIV and AIDS.

Since 1987, the Federal Centre for Health Education (BZgA) has been conducting an annual study entitled "Public Awareness of AIDS" to examine whether and to what extent these goals are being achieved.

The individual issues investigated are as follows:

The present Summary contains important results of the repeat survey conducted at the end of 2009. Key indicators are presented in the form of trends.