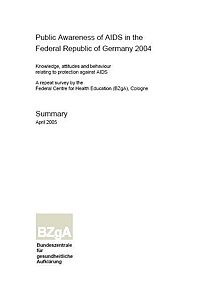 Public Awareness of AIDS in the Federal Republic of Germany 2004

Since the mid-1980s, the AIDS prevention campaign has been informing the population of the Federal Republic of Germany about the disease AIDS and the associated infection risks, particularly providing education regarding the fact that people should protect themselves against infection with HIV, and ways of doing so.

The impact of this AIDS prevention campaign on knowledge, attitudes and behaviour relating to HIV and AIDS has been studied by the Federal Centre for Health Prevention (BZgA) since 1987 by means of the long-term study entitled "Public Awareness of AIDS", which comprises annual, nationwide surveys conducted among the general public over the age of 16 in the Federal Republic of Germany.

The present Summary contains the central results of the latest survey, which was completed at the end of 2004. Key indicators are presented as medium or long-term trends, such as those relating to the reach of the campaign media, knowledge of when there is a risk or no risk of an HIV infection, protective intentions and protective behaviour, as well as willingness to help people with HIV and AIDS.

A detailed report (in German only) on the results can be requested from the Federal Centre for Health Education or downloaded from the Internet.