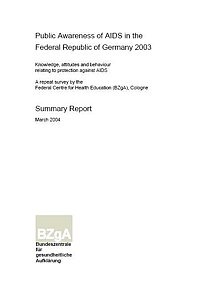 Public Awareness of AIDS in the Federal Republic of Germany 2003

Since the start of the AIDS education campaign in 1987, the Federal Centre for Health Education (BZgA) has examined the effect of AIDS prevention on the knowledge, attitudes and behaviour of the public regarding HIV and AIDS. To this end, it conducts the annual representative survey "Public Awareness of AIDS" among the general public over the age of 16 in the Federal Republic of Germany.

Specifically, the survey examines the degree to which

The present summary contains the key results of the latest survey, which was completed at the end of 2003. They are presented together with their longer-term trends, either for the general public as a whole or for subgroups of particular importance for prevention, primarily meaning 16 to 44 year-old singles.

A detailed report on the results can be requested from the Federal Centre for Health Education or downloaded from the Internet.