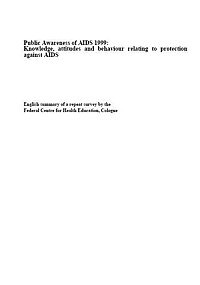 English summary of a repeat survey by the
Federal Centre for Health Education, Cologne

The results on information and communication behaviour obtained from the "Public Awareness of AIDS" study indicate a declining trend since 1993. The perception and reception of media that provide information and education on AIDS have been declining from year to year. This also applies to 1999, even though the decline is less dramatic than in previous years. In recent years, the Federal Centre for Health Education has successfully drawn the attention of the younger target groups, in particular, to the subject of protection against AIDS through the use of new media programmes.

In line with the overall decrease in communication on AIDS, protective behaviour has also been stagnant since 1996. For example, the use of condoms did not increase any more in 1999, even among groups that are of particular significance for prevention due to their sexual lifestyle, such as young singles.

The general attitude towards people with HIV and AIDS has not been affected by the decrease in communication on AIDS. It continues to be characterised by only a low level of stigmatisation and discrimination.

The knowledge of the general population concerning infection risks and non-risks also continues to be high. However, a high level of knowledge about risky situations alone is not sufficient for ensuring the further spread of protective behaviour. It is additionally necessary to have an education strategy that motivates people to protect themselves and promotes the acquisition of the skills necessary to practise protective behaviour. However, it would seem that an AIDS education campaign of this kind can only be effective if it is equipped with the necessary interventions and coverage.

The results of the study do not indicate that the German population is "tired" of AIDS education or "saturated" with information on AIDS. On the contrary, nearly three-fourths (72%) of singles under 45 again said in 1999 that they were interested in information on protection against AIDS.