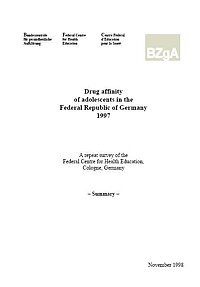 A repeat survey of the Federal Centre for Health Education,
Cologne, Germany

Alcohol
The proportion of 12 to 25-year-old West German adolescents and young adults who regularly consume alcoholic beverages at least once a week has been gradually declining since 1973 in all beverage categories studied (beer, wine/sparkling wine, spirits, alcoholic mixed drinks).

Since 1993 this trend has been evident in both the western and eastern Federal Länder. The proportion of those who rarely or never drink beverages of this kind is increasing accordingly.

This downward trend is particularly evident among young men in the East and West. Nevertheless, they still drink alcoholic beverages much more frequently than young women (except for wine/sparkling wine).

The decrease in alcohol consumption can primarily be attributed to a reduction in frequent, weekly drinking. The proportion of young people who drink alcohol on the weekends hardly changes at all. However, smaller quantities of alcoholic beverages are consumed on the weekends as compared to 1993.

The decrease in the frequency and quantity of alcohol consumption is accompanied by a decline in the experience of 12 to 25-year-olds with drunkenness.

Alcohol consumption is primarily motivated by its (purported) effect of promoting a sociable atmosphere. However, about one-fifth also mention the individual stress-relieving effect.

Smoking
The number of smokers is decreasing over the long term, but only very slowly: by 11 percentage points between 1973 and 1997.
An exception to this rule is East Germany. A two-fold process of adaptation has occurred there in recent years. On the one hand, the number of smokers among young East Germans has increased so drastically that it now exceeds that of young West Germans. On the other hand, the smoking habits of young women in the new Federal Länder have now come to match those of the young men.