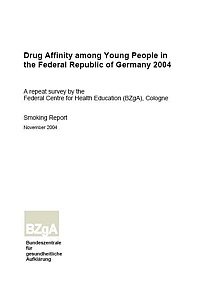 A repeat survey by the Federal Centre for Health Education (BZgA), Cologne

Since 1973, the Federal Centre for Health Education (BZgA) has carried out regular, representative surveys on drug affinity among young people and young adults between the ages of 12 and 25 years. Ten repeat surveys have been conducted to date; the first six covered the territory of the old Federal Republic, the four since 1993 covering the territory of the Federal Republic of Germany, including the new Federal Länder.

The subject of the study, denoted by the term "drug affinity", refers not solely to illicit narcotics, but also to alcohol and cigarette consumption. The results obtained for these three substance groups in the latest repeat survey, conducted in 2004, are presented in three separate reports on alcohol consumption, tobacco consumption and use of illicit drugs. The present report deals with the tobacco consumption of young people between the ages of 12 and 25 years. The current situation is first described in Chapter 2. This is done on the basis of several different indicators for tobacco consumption, such as lifetime prevalence, smoker rate and indicators for the intensity of smoking.

One important task of the Drug Affinity Study is to monitor the tobacco consumption of young people over the course of time. The corresponding results are reported in Chapter 3, in which the proportion of people who have never smoked and the smoker rate are presented as time series from 1973 to 2004. Particular attention is paid there to the change in the smoker rate among the younger age group of young people between the ages of 12 and 17. Chapter 4 examines the extent to which young people intend to switch from being nonsmokers to smokers, and how many smokers would like to quit smoking. The last section reports on the variables that influence smoking. The influences presented in Chapter 5 are those exerted by the school, the family and groups of friends on the tobacco consumption of young people, especially when these groups smoke to a greater or lesser degree. The final chapter deals with the prevalence and influence of attitudes, meaning both attitudes that favour and give rise to smoking, and also attitudes that restrict smoking in the spirit of health prevention, such as health-consciousness. Furthermore, this chapter reports on the reactions of young people to the new design of the health warnings on cigarette packs, which were introduced a few months prior to the repeat survey.

The overview below contains the key methodological data regarding the Drug Affinity Study and the 2004 repeat survey.