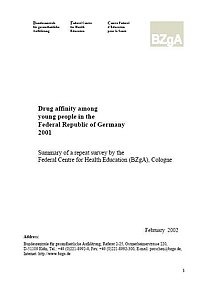 Since 1973, the Federal Centre for Health Education (BZgA) has carried out representative surveys of substance use among young people and young adults in the Federal Republic of Germany at three to four-year intervals. The results of the individual repeat surveys are published under the title "Drogenaffinität Jugendlicher in der Bundesrepublik Deutschland" [Drug affinity among young people in the Federal Republic of Germany]. The name of the project, "Drug affinity", is an indication of the subject of the survey. Firstly, it is concerned with epidemiological data on substance use, i.e. alcohol, tobacco and illegal drugs, but other indicators of proximity to or distancing from these substances are also involved, such as willingness or unwillingness to take them, motives for consumption and attitudes to substance use. Other data are also included that are additionally collected in the individual repeat surveys to meet current information requirements of specialist departments at the BZgA, such as data regarding settings and information media via which young people can be reached, this being important for drug prevention.

The data for the last drug affinity study were collected from November 2000 to January 2001. During this period, 3,000 young people aged from 12 to 25 years were questioned: 2,000 people in western Germany, 1,000 in eastern Germany (a disproportionately high percentage so as to be better able to trace and analyse the particular developments in substance use in the new German states). The survey method used was the computer-aided telephone interview (CATI). The data were collected by the Forsa institute, Berlin.

The study is currently being analysed. The first part of the analysis has already been completed and the results published in a research report1. It contains the most important indicators for the prevention of high-risk substance use. These first include the long-term trends in substance use among young people from 1973 to 2001, the intensity and direction of which may be important for assessing drug prevention in the Federal Republic of Germany. Secondly, they involve results regarding short-term changes over the past few years, which may be useful for the further development of prevention strategies. Both the long-term trends and a number of important current results have been compiled below, firstly regarding alcohol consumption, then for tobacco use and, in a third section, for the use of illegal drugs.